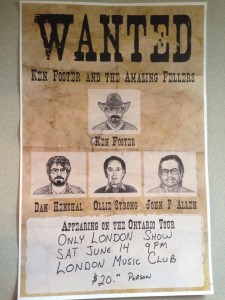 Ollie Strong has been at my side since my first record Endless Roads in 97, Ollie spent 17 years with the Tommy Hunter show, recorded with Gordon Lightfoot and the Good Brothers and many more Canadian folk, and spent a lot of years in Nashville as the studio man of steel, he played on rock and roll records in the late 50s, a first.

John P. Allan joined Ollie and I in 98 when we started working on Sunset Rider. John is one of the founding members of Prairie Oyster, one of our greatest country bands ever in my opinion, as well as playing with the Good Brothers for about 30 years and many more good Canadian folk. I guess Sunset Rider is a type of country album, we put this out in 2001, mixed with some easy rock, Anne Lindsay recorded on it with us as well and Dan Broadbeck co-produced it with me. It was after that record I decided to buy my own studio gear and do it on my own, BR1600 is my studio combined with my Mac. Day Dreamer is from this, it was my idea to have it sound like it came from the late 70s early 80s, it took me 3 years to complete this record, I released it a few years ago, it has Brian Good and his lovely wife Susan, and Bev Allan singing backing vocals , some incredible songs on this one. John P. Allen has been in the music business for 40 years, performing with such acts as The Good Brothers, Ian and Sylvia Tyson, Tommy Hunter, John McDermott, and primarily with the Juno-award winning band Prairie Oyster. He is a member of the Canadian Country Music Hall of Fame. For the past dozen years, he has also lent his talents to the Ken Foster Band, and especially enjoys the rehearsals at Ken’s private lodge when the fishing poles come out!

Dan Hanshal has joined us and plays stand-up bass, no percussion, this record has an old feel about it, folky/bluegrassy, feel good record.